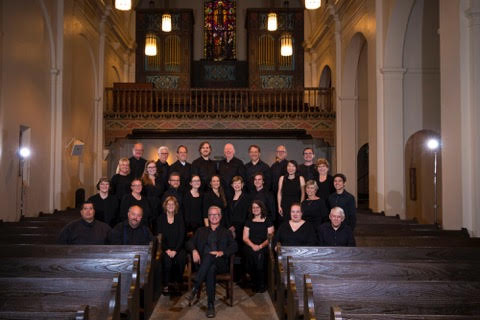 Known for its “voluptuous tapestry of sound, vocal purity and radiant sonorities,” the Quire of Voyces celebrates its twenty-fifth anniversary season steadfastly dedicated to its mission of presenting and recording world-class, transcendent interpretations of sacred a cappella works from the Renaissance and modern eras in spectacular historic settings. Envisioned and founded by Artistic Director Nathan Kreitzer in 1993, the Quire comprises professional singers from Southern California who volunteer their time, passion, and skill to create the ensemble’s acclaimed “crystalline” sound.

In addition to presenting repertoire staples from Byrd, Victoria, and Palestrina, the ensemble delves into works by lesser-known Renaissance contemporaries and performs fresh interpretations of present-day composers such as Eric Whitacre, Michael McGlynn, Steven Sametz, Carl Rütti, and Frank Ticheli. The ensemble also premieres works by its award-winning composer-in-residence, Michael Eglin. Over the years, the Quire has occasionally branched out from its a cappella roots to collaborate on major orchestral works with the Santa Barbara Chamber Orchestra (Mozart Requiem, Bach Mass in B Minor, and Handel Dixit Dominus) and the Santa Barbara Symphony (Beethoven Ninth Symphony, Mahler Second Symphony).

Beyond Santa Barbara, the ensemble performs internationally. Most recently, Quire of Voyces has been selected to perform at the esteemed Llangollen International Music Festival in Wales July 2016. The Quire accepted an invitation to sing at High Mass at St. Peter’s Basilica in the Vatican and responded to multiple requests for encores in Naples and along Italy’s Amalfi Coast. Its tours to Europe have included concerts at Salisbury Cathedral, Canterbury Cathedral, and Saint James Picadilly in London as well as performances in Vienna, Prague, Budapest, Finland, Estonia, and a special appearance at the Gotland Medieval Festival in Visby, Sweden.

This year, in addition to its regular concert season at St. Anthony’s Chapel, the ensemble can be found participating in local community events such as First Thursday at the Santa Barbara Museum of Art.

The Quire also has a distinguished recording history. All six of its recordings can be purchased at Quire concerts and at Chaucer’s Bookstore, Santa Barbara Arts, Amazon.com, iTunes, and CD Baby. Quire recordings are featured on classical radio KUSC 91.5 FM.